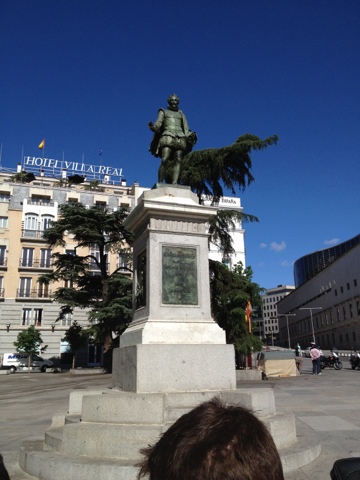 Miguel de Cervantes. Author of Don Quijote and various other works. He’s considered the best author ever by many Spaniards, and statues of him abound. 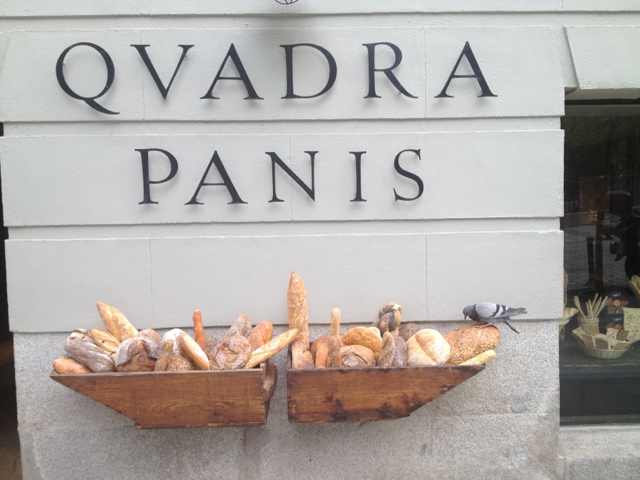 This one is here as a bit of a fun picture. It’s a bread shop, and their advertisement was old bread out front. That’s a real bird, and we watched him for several minutes as he pecked away at the bread and ate what he could. 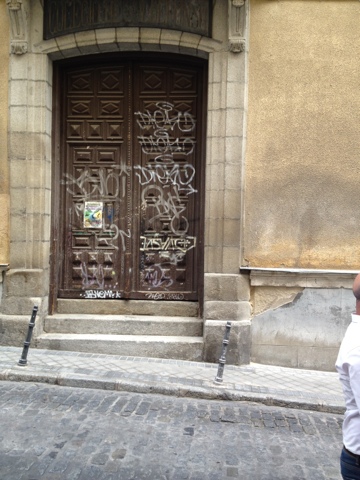 Graffiti. This was on a lot of closed down businesses and buildings. It was also ALL OVER the high ways and stuff. I wish I had some pictures of that, it was striking. When we asked Sean about it (That’s him at the very edge of this picture), he said that they were not gang signs, as gangs are generally seen as uncool, and don’t really exist in Spain. Rather, he said that the graffiti is generally done by mentally retarded people. And true to the Spanish way, he didn’t talk around it; he flat out called them mentally retarded. (Or retarted, as it sounded with his accent, a mix of Irish and Spanish, when he spoke English.) 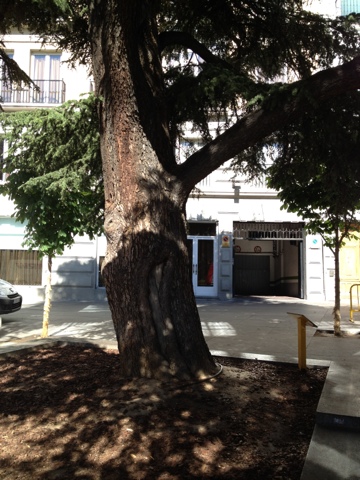 This is a Spanish Cedar tree, and an old and beautiful one. It’s the kind of tree that most cedar top guitars are made of. 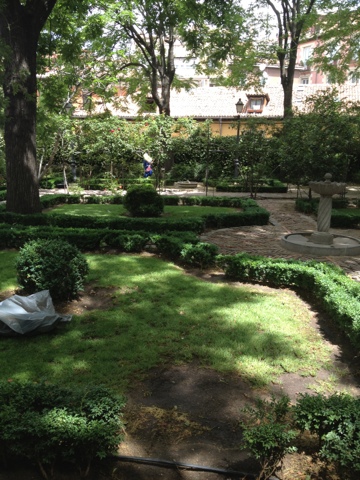 This was a beautiful little park hidden in some very urban part of the city. From what I understood, it was a gift to a prince in the olden days, and his descendants still live next to it and own and maintain it.
We took a little tour of the city, and that’s what these pictures are from, before our main event of the day. We got to spend most of the day inside the Museo del Prado. Wow. When I go back to Spain, I want to dedicate something like a week to coming back to the Prado every day. The Museo del Prado focuses mainly on older art.
The first thing to note is that no pictures are allowed to be taken inside the Prado, so I, like a good boy, don’t have any of my own. There are plenty on the internet, but I suggest that if you ever have a free week and happen to find yourself in Madrid, Spain, go visit the museum, and do yourself a favor.

Las Meninas, by Diego Velázquez, is the most famous piece in the collection there, and for good reason. There’s a lot of story and a ton of meaning in this seemingly simple piece. It’s a sheer work of genius.

There are two pieces, La Maja Vestida, and La Maja Desnuda, by Goya, that I made a special effort to go see after the tour was over. Sadly, only the desnuda was there. I made the effort because I greatly enjoy the guitar piece, La Maja de Goya.
Doña Juana la Loca
This piece. It’s about Juana la Loca, obviously, and was painted by Francisco Pradilla. It documents the moment when the queen supposedly went mad, staring at her husband’s coffin. I can’t describe exactly why or how, but this painting struck me more than anything else in the Prado. It’s full sized, so all of the people are human sized, and it takes up an entire wall of a large room. I still get shivers thinking about it. It just struck me as epic; there’s an incredible number of stories hidden in this painting, just waiting to be told.
All in all this was one of the best days of the trip. After a nice morning tour of some very nice places, we spent most of the day inside an air conditioned building, looking at some of the most famous paintings in the world. And the highlight of the day was the painting of Juana la Loca. When I go back, I’m going to spend hours just staring at that picture. Wow…