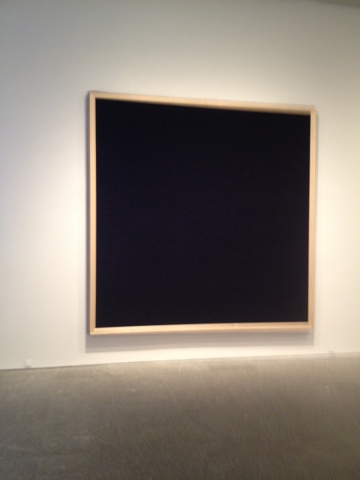 We went to the Reina Sofía, a modern art museum. I don’t get modern art. Here’s a black square on the wall. 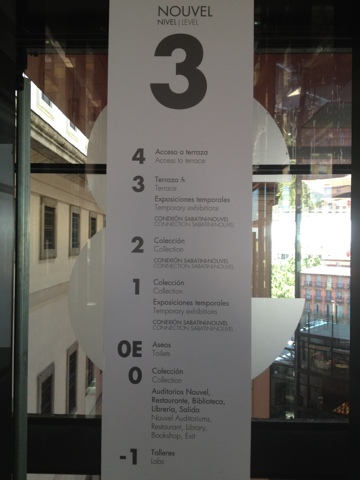 This was the most interesting thing about the museum to me. It’s the floor chart by the elevator. I’ve explained it, and a bit of how Europeans do floors, below. 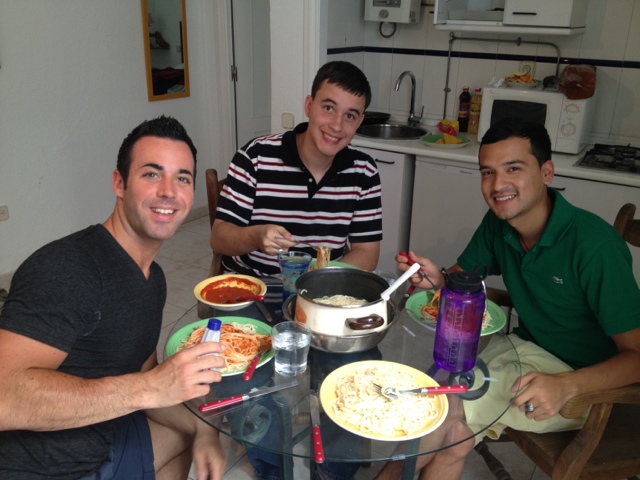 Here’s some awesome spaghetti that we cooked for dinner, and some happy people eating it. L-R, Niko, our overall guide, Ethan, and Roberto. The plate in front is mine. I think all told, this meal cost about 2 euro, and fed all 4 of us quite well. 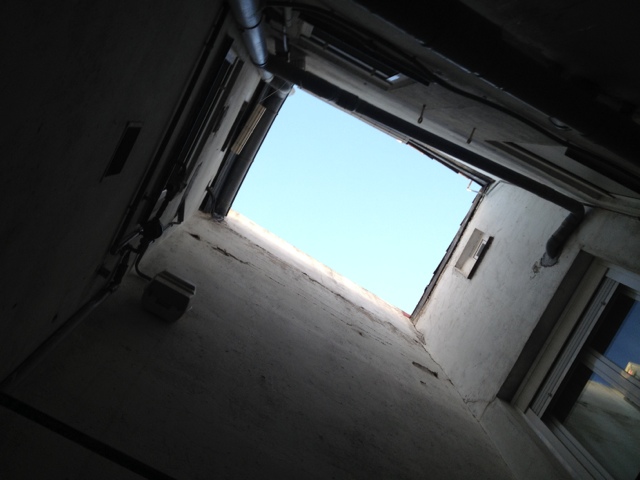 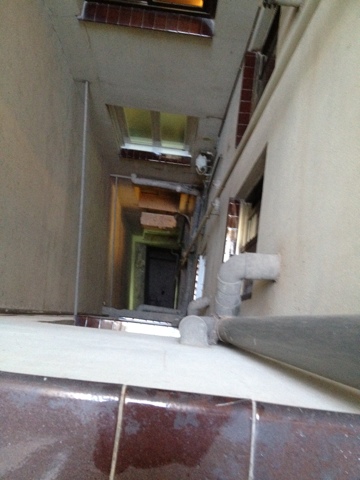 Here are the views down and up from our bathroom window. Lovely, aren’t they? 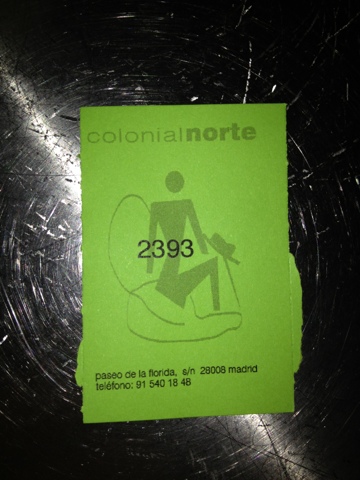 That night, we went to a flamenco show. Here’s my 10 euro ticket to get in. It was easily worth all 10. 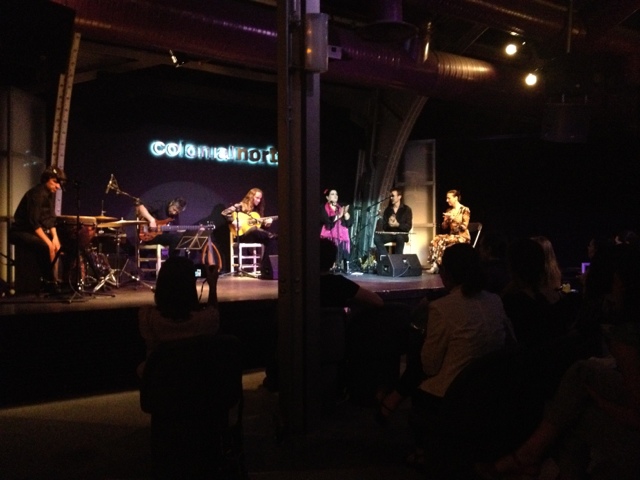 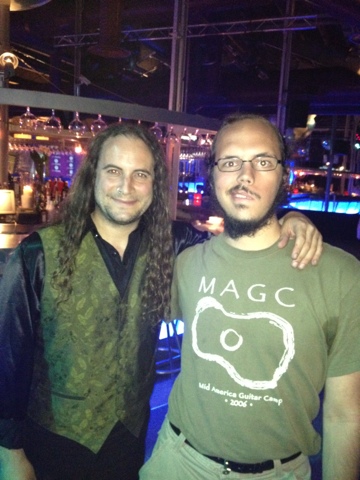 Me with the guitarist after the show.
So yeah, I don’t really get modern art. Here’s the mission statement for the museum. It’s apparently in English, though I understood many things in Spanish a lot more than I understand this.
“The Museo Reina Sofía program is based on a redefinition of the function of museums, on an alternative to the institution’s historical models. Conceived to be a place that generates opportunities for sociability and discussion in the public sphere, the Museum proposes models of resistance in a society in which consumption and merchandise predominate and in which production has become fragmented, thus resulting in a geopolitical map hitherto unknown, and also in new social classes, relations and subjectivities. Creating alternative narrations, developing new forms of intermediation and forming active spectators are the Museum’s main priorities.
The Museum challenges the central-peripheral dynamic and the univocal vision of art history. Art history is no longer written as if it were comprised of large continents, but rather as a kind of archipelago in which varying relations emerge in an ever-changing cartography. Here other forms of modernity, previously considered subordinate, are able to fully express their complexity. Artists previously considered secondary or derivative have their own voice, challenging, thanks to new links of solidarity with intellectuals and other collectives, the rules established in the Western European world.
The Museum’s Collection is intended to create intertwining narrations that take the form of archives. Aesthetic autonomy is diluted by the inclusion – all on the same level – of documents, artwork, books, journals or photographs, thus giving rise to alternative narrations that give back to viewers knowledge, aesthetic experience and the possibility of comprehending a historical moment. The idea is to create an archive of archives that gives to the Other the voice and capacity with which to archive, rethink and narrate its own history. In this model, in contrast with that of capitalist accumulation, he or she who receives stories certainly becomes richer, but he or she who tells the stories is no less rich. The writing of history thus takes place from the bottom up, with a dissociation between memory and property.
The Museum proposes an educational conception that eliminates hierarchies and highlights the revitalising power of culture, based on its conviction that each one of us knows how to rediscover and redefine knowledge. The work of art represents common ground for the artist and the spectator, and as such it facilitates a relationship with others and with an environment perceived not as belonging to someone else but rather as one’s own. It enables us to see ourselves both as subjects and as objects of the perception of others, thus creating a new, liberating space for sociability. In addition, the Museum is a place for debate and research through seminars and University programs born of the interaction, which is neither unduly influenced nor hierarchised, between education and the array of activities – exhibitions, the Collection, public programs – carried out by the Museum.“
Floors in Europe. When you walk into a building from the street, you are not on floor one. You are on the planta baja, or essentially ground floor. The floor above you is the first floor. We would call it the second floor. And so on, all the way up. When this is put on signs, sometimes they simply label the ground floor the floor 0. And below that are -1, -2, and so on. The sign above demonstrates this. The biggest impact on me was that our apartment was number 47, on the 4th floor. But it’s the equivalent of our 5th floor, so I was constantly stopping one floor too soon, unconsciously counting floors and getting off at what my subconscious told me was the 4th floor.
Spaghetti was good, and made this way allowed me to not have tomato sauce on it. (I’m mildly allergic to tomatoes.)
The flamenco show was not a traditional flamenco show. We saw one of those in Granada, and I’ll talk about it when we get there. This was a more modern flamenco. The show started with the guitarist playing a solo piece. He was then joined by the bass and drummer, and then everyone for the third piece. The whole group was amazingly good. I took some video, and will attempt to post those when I get my own computer and can deal with that stuff properly.
Meh morning with the museum, but with a good dinner and some really fun music, I ended the day feeling refreshed and happy. 🙂