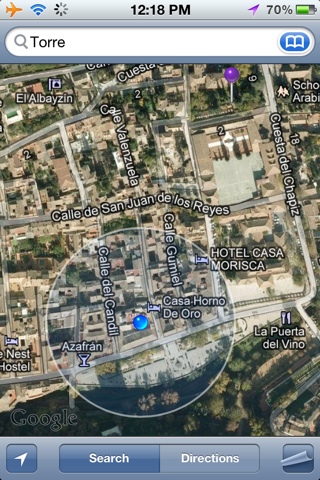 Here’s a closer idea of where the hotel was. Sorry if the red dot in the other one was hard to find. 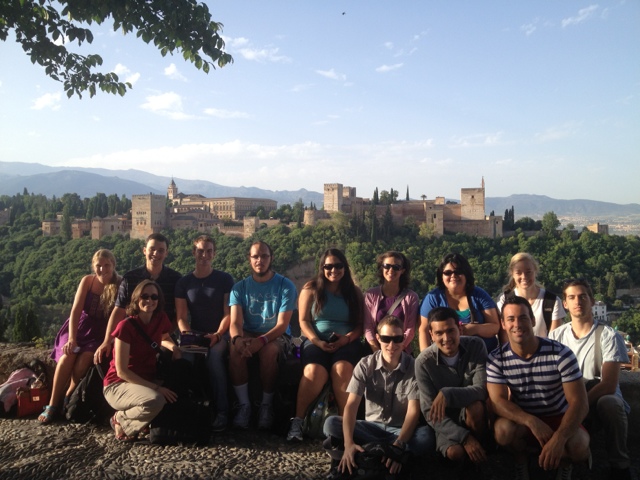 Here’s the entire class early Monday morning, before our first class. We were all relatively well rested, having only really done a bus trip the day before, not having done any class yet, and this being early enough that we were all awake, but not tired yet. I personally think this is one of the best pictures I have of the trip, but I’m partial to the Alhambra. 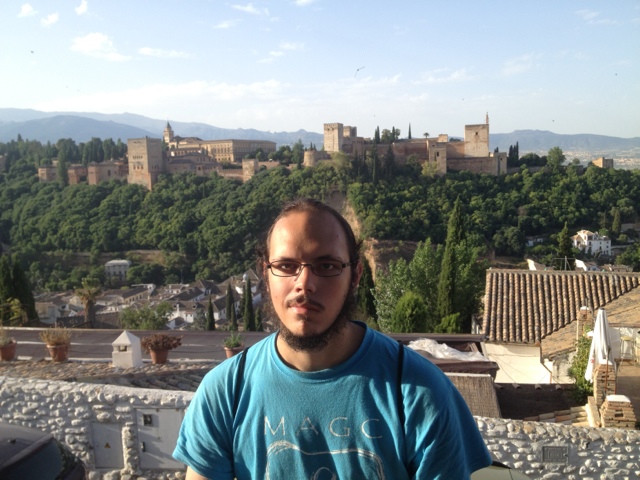 Some random dude at the same place, the Mirador San Nicolás, or lookout viewingpoint of Saint Nicholas. 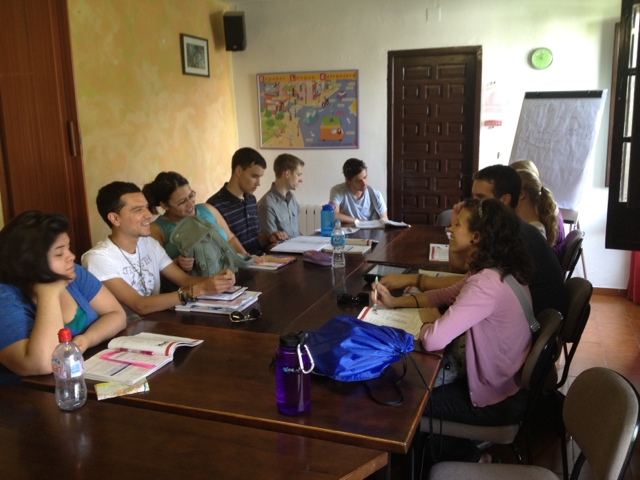 Our classroom, which was actually pretty nice when we had all of our chairs, tables, the bathroom worked, the air conditioning was on, and we weren’t taking a test. (The teacher didn’t like us sitting next to each other during tests. When we were in Austin, there were plenty of chairs to make it work, but here we simply couldn’t look up from our test paper, which gave me neck pains on occasion.) 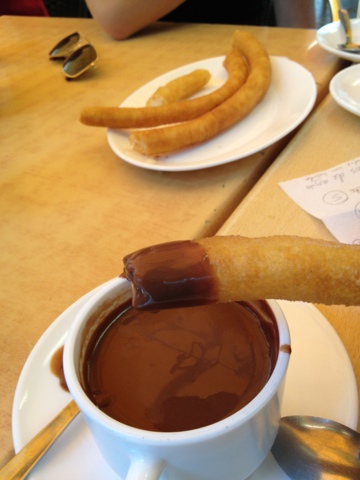 Chocolate y Churros. Churros are called Spanish Doughnuts, and the chocolate was some kind of hot chocolate/milk mix that was really good. As a snack, these were cheap and awesome. 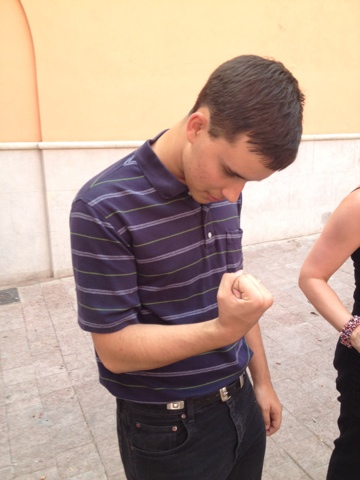 Ethan. I think he was just promoted to being Captain of an important ship in Spain’s navy, but don’t quote me on that.
So, we had class today, and took a short tour of the city, and then returned to our room to do homework, which took up the rest of the day. Being as pictures of homework would be boring, I’ll talk about money instead! 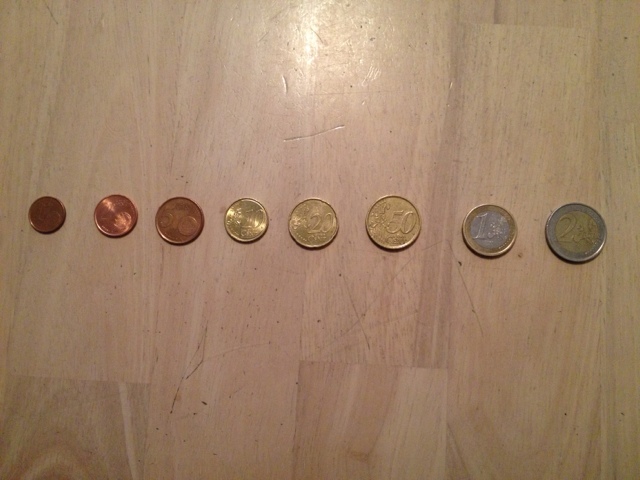 Here’s all of the denominations of the Euro that, well, Europe uses. If you aren’t aware, Spain is part of the European Union, and all of those countries have agreed to use one currency that can transfer from country to country with no exchange rate. From left to right: 1 cent, 2 cents, 5 cents, 10 cents, 20 cents, 50 cents, 1 euro, and 2 euro. The bills, which I spent all of without taking pictures (shame on me…) were 5 euro, 10 euro, 20 euro, and 50 euro. A euro is 100 of their cents, making it approximately one of our dollars. 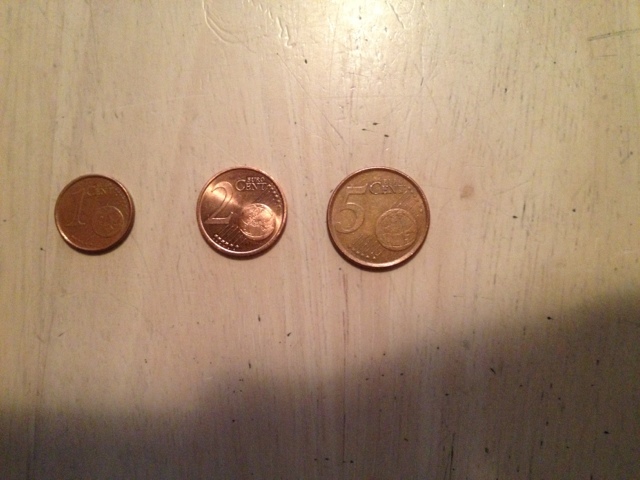 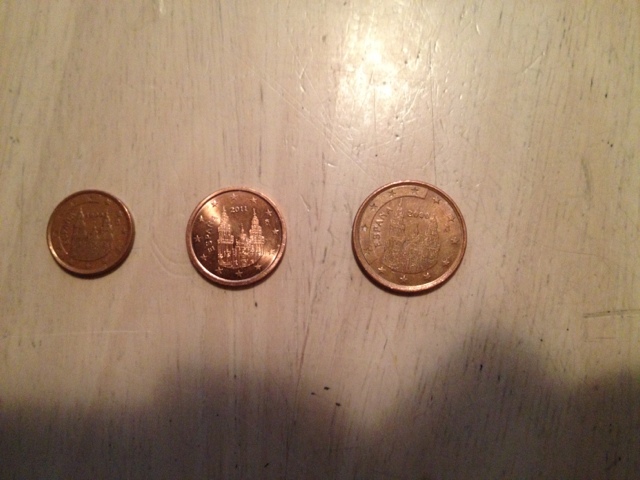 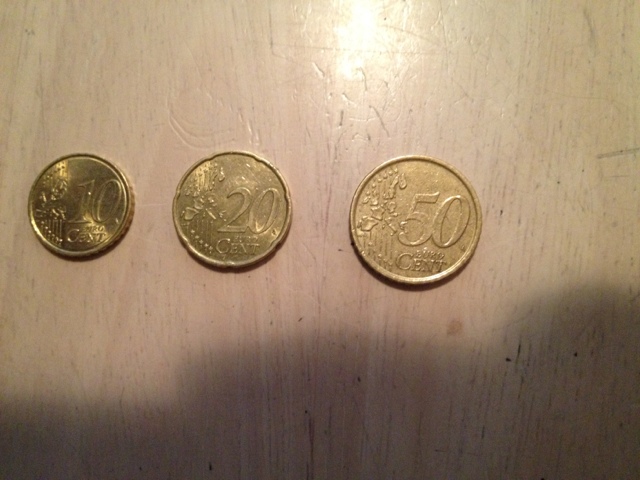 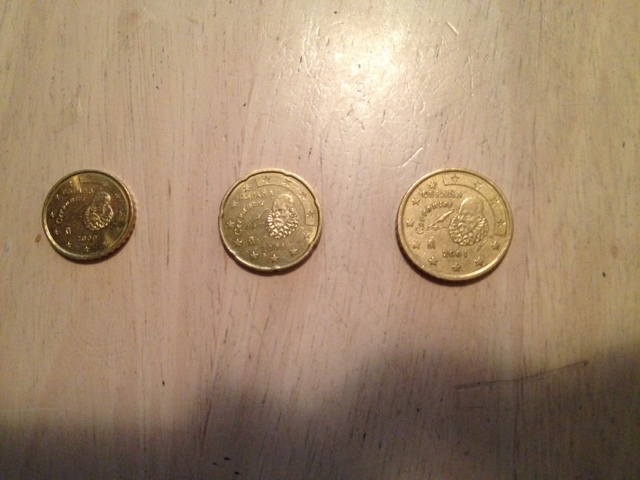 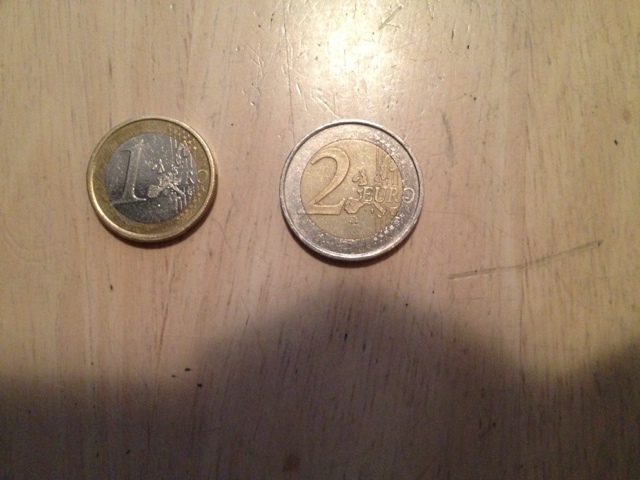 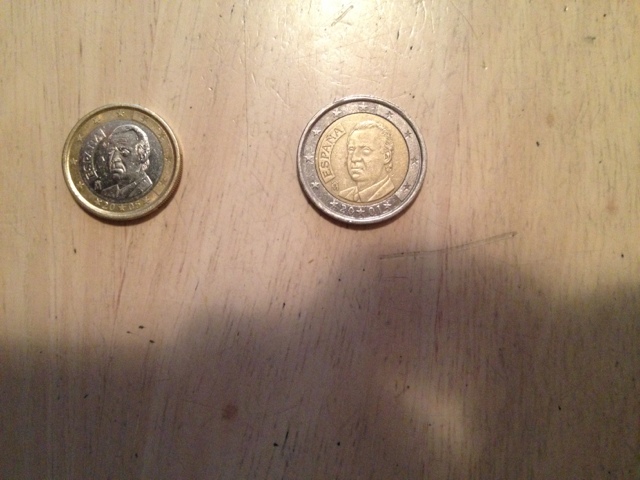 1 and 2 euro. These are hefty, larger and heavier than a quarter. 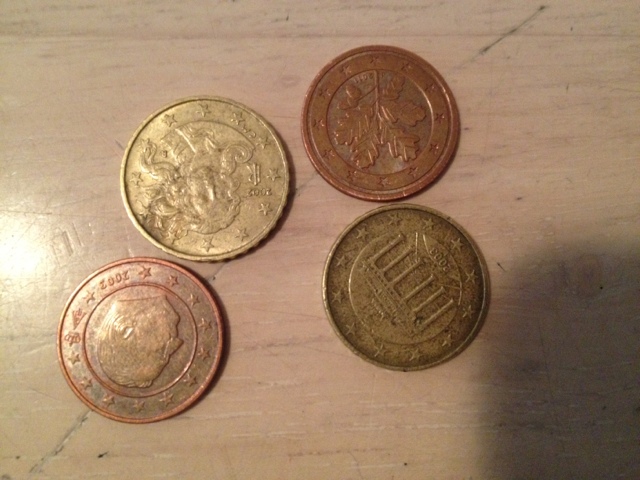 Some euro coins not from Spain, which were still taken/given/used in Spain.
Some quick notes. The 1, 2, 5 thing running all the way up makes an awful lot of sense, at it makes it really easy to make change with just a few coins, cutting down on the number we use. I haven’t done the math, but it was obvious just from going to the store that it was much easier and faster.
That’s Cervantes and a quill on the Spanish 10, 20, and 50. I told you he’s everywhere…
The exchange rate when I was there was 1:1.25 Euro:USD, meaning 1 euro is about $1.25.
€ is the sign for a Euro, used just like we use the $.
They use commas in place of decimals, and vice versa for numbers. So our 2.12 is their 2,12, and 123,456,789.42 is 123.456.789,42. It’s confusing, and I don’t think this one is particularly better than what we do here, as so many of their other things are.
Anyways, it was a good day, and the view from the Mirador was just amazing… until the teacher ruined it by teaching the class that we went to Spain for. (That’s a joke, we all loved the teacher, she was awesome.)