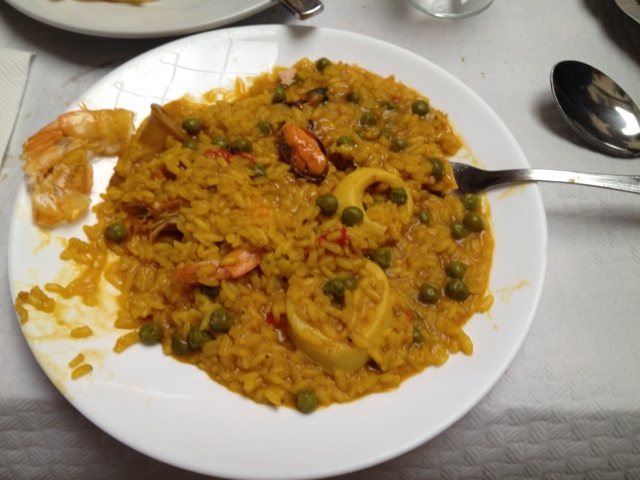 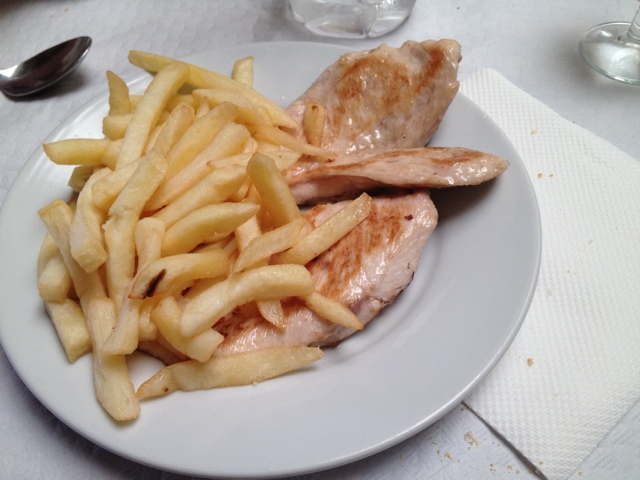 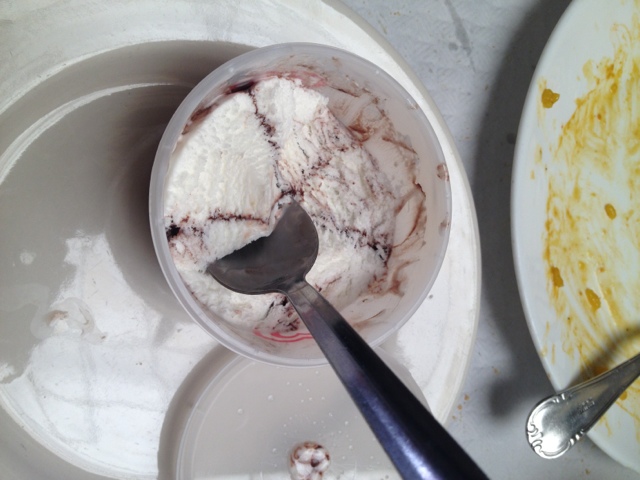 One of the meals I ate in Spain.
So they have an interesting schedule in Spain. You get up around 8, have breakfast not long after, and then lunch at around 3 and dinner at like 10 or so at night. Breakfast is usually eaten at home, and dinner is well… I don’t know what dinner typically is, as I always either skipped it or ate something in the apartment.
Lunch though, that’s the interesting meal. Many places serve a Menú Del Día, the menu of the day. It’s supposed to change every day, but in general it doesn’t. This consists of three courses, and generally costs about 10 euro, depending on what part of town you are in. There’s a picture of one of the menús above.
First course: Paella Marisco. Seafood. There’s shrimp, mussels, and yeah, those yellow circular things tasted a bit rubbery. Squid! Good stuff, though not as good as what we got in the cooking class.
Second course: Pollo a la plancha con patatas. Grilled chicken with french fries. Good stuff.
Last course: Helado. Ice cream.
There was nothing left from this meal other than the shrimp shells. It was good. In general, the first course was usually a choice of a soup (gazpacho, usually), salad (ensalada mixta), tortilla española, or Paella. The second course was usually meat. Lamb, Iberian pork, chicken, and beef were all common. Finally, deserts. These included ice cream, fruit, and sometimes a cake. All in all, there was almost always something that I would eat, and it was so much food that I would often grab one of these in the evenings around 4 or 5, and it would suffice as both dinner and lunch, saving me a lot of money.
As a note, gazpacho is a tomato broth soup, and the ensalada mixta usually included everything we’d put on a salad, plus corn kernels, tuna, beets, and excessive olive oil. Which they use on everything. You saw the picture of the number of trees they have there. They use that stuff everywhere! The tortilla española was just good. It’s a mix of potatoes, onion, and egg that’s cooked like a pancake.
So yeah. I was really well fed while I was over there. They know how to cook and how to feed in Spain. Food was a big overall highlight of the trip.