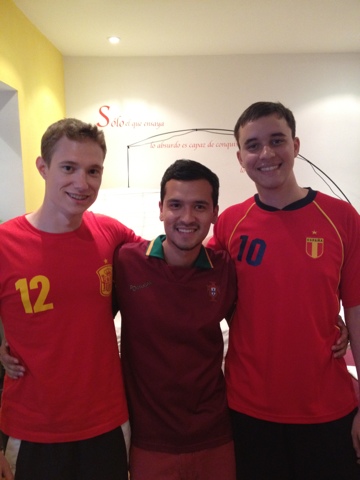 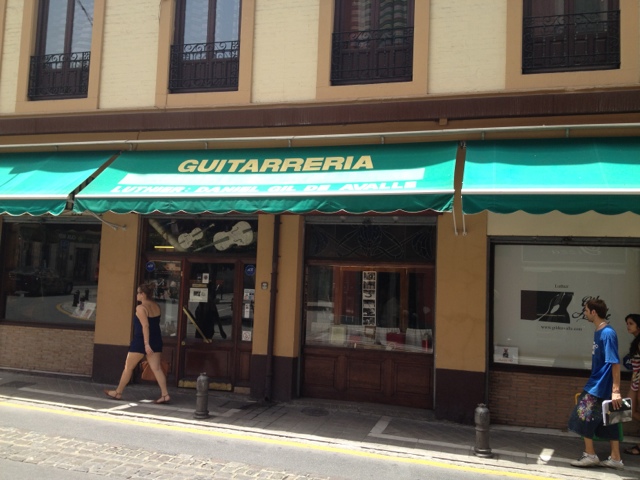 One of the local guitar shops in Spain.
Sorry this wasn’t up yesterday. I’ll try to be better about that in the future.
So today was the final exam, even though it wasn’t the final day of class. We had interviews tomorrow. (I might have had a few odd tenses there. The interviews were the day after this post was talking about, which is Thursday, so they’re in the future of the post, but the past of now.) I did decently well on the final exam, and was happy with my score.
So yeah. At this point, Italy had just beat Germany the day before to advance to the finals, and the winner of the Spain-Portugal game would play them for the championship title of the Eurocup. Roberto liked the Portugal team, and had a jersey for them, so he supported them for the game. Thankfully, he was smart enough to stay in the apartments; I think he would have been mugged if he’d gone out on the streets with that shirt. It was the best game of the entire cup in my opinion, with both teams playing very well. The game ended 0-0 after 2 hours, and the teams went into shootouts, which Spain won 4-2, and thus advanced. That meant they’d play Italy and the crazy mohawk shirt-ripper dude on Sunday, while we were flying back to the states. We were a bit disappointed that we were going to miss the game. (Note, I may actually have the game dates for Spain-Portugal and Italy-Germany backwards, but I’m too lazy to look them up.)
During the day, I went to a guitar shop. That’s it in the second picture. Again, you can see the granadas-on-poles that lined all of the streets. This was a luthier’s shop, meaning that he sold guitars that he made himself. He made all types, flamenco and classical, spruce and cedar. I’m partial to a cedar, myself, and spent most of the time trying out a nice cedar classical. I don’t like it as much as I like the guitar I have at home, but I don’t like much anything as much as I like the guitar I have at home. I love that guitar. However, the guitar was certainly a concert quality instrument, and cheaper than any other guitar that quality that you can find in the states. I didn’t get to visit any more guitar shops, but I got the impression that the quality and pricing were typical in Granada, if not all of Spain.
I hadn’t played for a good three weeks before going in, because I hadn’t brought my guitar to Spain, and the days before were spent packing and studying like a madman. So, I didn’t sound my best on the guitar, but it felt really really good to get to play it. During that afternoon, the entire crew except me and one other went to the beach, and when I went to take maybe an hour for my siesta, I ended up sleeping for a good 5-6 hours until the others returned, because it was actually quiet and peaceful in the apartment for once. Thus, it was a really really good day. Good final exam grade, fun playing a nice guitar, a long, uninterrupted nap, and Spain won a really good game of football.