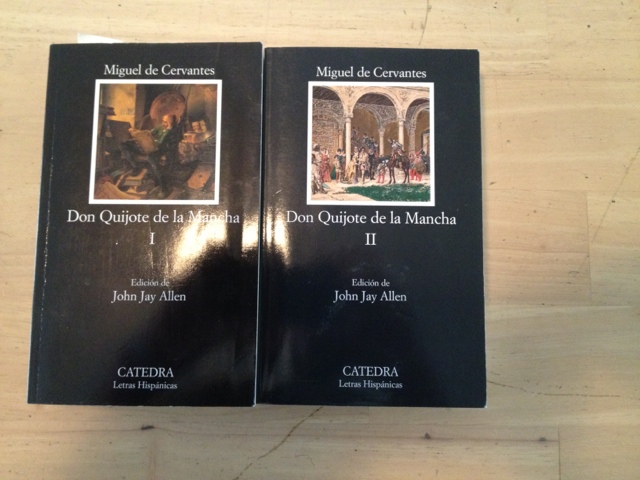 The full Don Quijote, in Spanish.

Some abanicos, fans that were very popular in Spain. Also, my feet.

A sideways sign. It’s right side up in real life, and I’m not sure how to make the picture rotate.
So today, we basically got up, did a last little bit of shopping, got on a bus, spent 6 hours on a bus, and went to Madrid. We stayed in a hotel for one night. And it was an actual hotel, built exactly like the hotels here. No kitchen, nothing. And one of the expensive hotels too. There were sodas in the refrigerator. 3 euro for a can, if you drank one. All that annoying stuff. The internet was like 6 euro per hour, so I had no connection that night to communicate with anyone. The beds were also considerably less comfortable than the beds in the hostels, and our room was a two bedroom room with a third stuffed in and taking up all of the extra space and making the room really cramped. I shudder to think what was paid for that hotel, which was, in my opinion, the worst accommodations of the entire trip.
So, some of the other things I bought, and yes, I bought more than just cards. After seeing so many statues of, and hearing so much about, Miguel de Cervantes and his work Don Quijote, I went out and bought the complete thing at the Corte Inglés. It’s hard reading, in Spanish, but I’m working on it.
But wait! Isn’t the Corte Inglés the grocery store? No wait, it’s where you sent letters. No, you bought books there. Gaah! Yeah, it’s all that and more. The last picture there is a sign inside the Corte Inglés in Granada, that tells you what’s on each floor. I tell you, they have everything.
Abanicos are a very traditional Spanish item, and very common. There were a lot of street vendors who sold them, as well as several shops. Probably 1/5 of the people I saw in Granada had them and used them quite a lot. The ones above are gifts for people here in the States. I’ve already given some of them away, and will be giving away the others when I can.
Tomorrow’s the last day, and I’ll talk about the trip back as well as other random reflections.