This post doesn’t have a lot of words, because a picture is worth a thousand words. Note that I’ll still talk a bit because, well, that’s how I roll. I’m super busy with school, I don’t get to read a lot lately. Here’s a picture of the books I have sitting, waiting for me to read, that I’m not letting myself touch until I have time to read one cover to cover. Because that’s also how I roll. 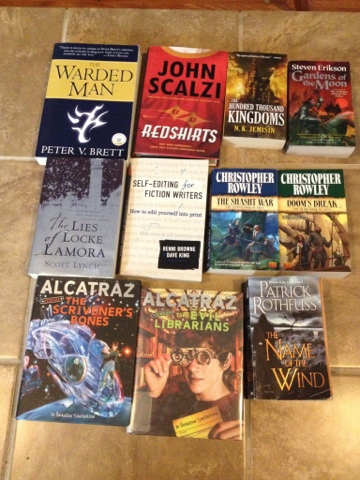 There’s two more that aren’t pictured here, little known things by the names of Ender’s Game and A Game of Thrones. They’re both on a bookshelf somewhere, but they will get read.
I also have a copy of Unfettered on order. Please also note that there are two sequels to The Warded Man, with two more books planned. Redshirts is a standalone. The Hundred Thousand Kingdoms is the first in a trilogy. Gardens of the Moon is the first in a 10 book series, totaling over 10k pages, and 3.3 million words. The sequel to The Lies of Locke Lamora is out, and there are what appear to be 5 more books coming. The next book is a writing book. The Shasht war and Doom’s Break are the second and third books in a trilogy. The two Alcatraz books are the first two of four, with a fifth planned, and The Name of the Wind is the first in a trilogy, of which two are currently out.
So yeah, if I like the books that are there, I have plenty to read for a long time. Not to mention the Game of Thrones or Ender’s Game books. Not to mention that Brandon Sanderson has three MORE books scheduled to come out this year. (Yeah, and A Memory of Light already came out. How’s that for lots of writing?) Not to mention that I also have a few more books that I want to order. I want to try out Brent Weeks, for example, and will be ordering his entire Night Angel Trilogy (cheaper than buying the individual books) soon.
November is going to be a particularly hard month for me. I’ll try to explain why as succinctly as I can. NaNoWriMo. Catching Fire. Words of Radiance.
And with that, I’ve tortured myself enough for the day. I’m going to go do some schoolwork, so that hopefully, I’ll have time over the winter break to at least start on some of these books. 😦