A while back, I wrote a post about hair. It’s a bit fragmented and scatter-brained, sorry. You can read it if you want. It tells the story of how my Calculus II teacher cut his hair and freaked everyone out. I liked what he did so much that I decided to do the same thing. Here is 17″ of my hair that was cut off and donated to Locks of Love. 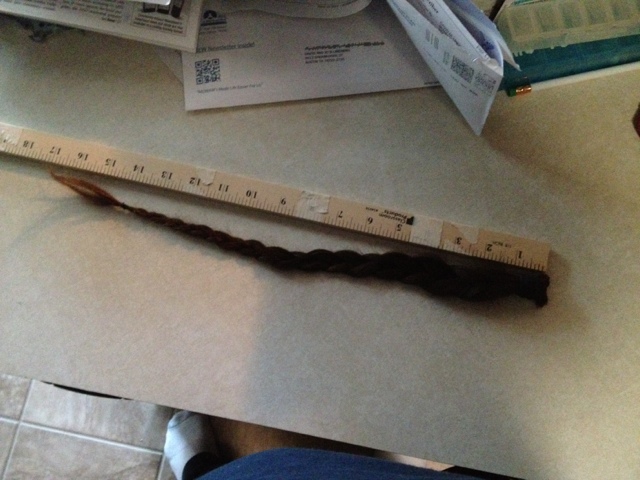 Not only that, but because I made a school decision–I will be at UT Austin in the fall, I dyed the hair that was left brilliant orange. Plus, I shaved, and all that. It was quite a shocking change, but I like it. Here’s what I looked like. 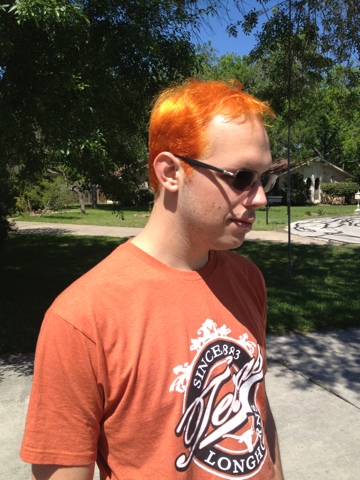 By now, the dye has worn off, so it’s partly bleached, partly normal color, while it grows out. I’ll be going to get it cut at the beginning of July, so it will look normal for orientation and my ID picture at UT. As normal as it can look for being short.

I cut and dyed my hair the week of finals, so it was like the picture above when I went in for classes that last week. The reactions I got were priceless. I have video recordings of several of them. I don’t think I’ll ever post them, because some people, shall we say, over-reacted. But they make me smile.

I’ve liked having my hair short. For the first few weeks, I missed having long hair. But now, I like how easy it is to wash and take care of, so it will probably stay short for the foreseeable future.

That’s about all I have to say on the subject of hair right now. As far as life, it’s been nuts, but I’m having the time of my life. I’ll be trying to write some more posts soon to bring you guys up to speed.