You know those days that are supposed to be the most awesome days ever, the ones that you anticipate for weeks or even months, waiting and hoping, knowing it’s going to be awesome, and then you’re let down, not by the day, which was actually pretty good, but by your expectations, which were too high?

Today was not one of those days.

I’ve been looking forward to meeting Brandon Sanderson ever since he took over the Wheel of Time and I picked up Mistborn and enjoyed it. Since then, he has become my favorite author. I stalk him like most people do celebrities, always watching his Twitter, Facebook, blog, and so on. I also listen to his podcast, Writing Excuses, as well as pretty much any video on Youtube that he’s in, and any interview with him. A few months ago, he announced that he was making a stop in Austin, and I was so excited!

Well, that was today. Let me give you a run-down of the events that transpired today.

I live about two miles from the location of the signing, now. I was bringing 24 books with me, and taking 32 back, so I caught a bus, then walked about four blocks downtown to the convention center where the festival was being held.

Once there, I purchased the 8 new books (The festival had a policy of buy 1 book for every 3 personal copies you brought to be signed. I adhered to it, even though it was on the honor system.) and then met up with the person who used to baby-sit me when I was a kid. Like, a little kid, and I’m 21 now. Talk about a blast from the past.

I ate brunch at the dorm cafe before I left, because you’re not allowed outside food or drink in the convention center. Their water was $3.25, and I stopped looking before I freaked out over how much the food was. I didn’t buy anything all day from the concession stand. It’s not like I could, anyway. After buying all of the books, I’m pretty much out of money until I get a job.

I went to Brandon’s panel, but I’ll come back to that at the end. After his panel, I went to another panel with Cinda Williams Chima (and various other authors.). The mood of the second panel was much lighter and more fun than the first one, and I enjoyed it quite a lot. After the panels, I went downstairs and got all of my non-Sanderson books signed, including the other 6 that I bought that day, so I got to meet 5 new authors, and get my books by all of them personalized. That was awesome, in and of itself. Before today, I had never met a published author, and now I’ve met several. It was fantastic.

I’ve been a fan of Chima for a long time, and I have all of her books. While signing my stack, she made the comment, while looking at one of them, that “This is an old edition. You’ve been a fan for a long time, haven’t you?” That made me so happy, because yes, I have. I got a copy of The Enchanter Heir, which isn’t out until October 1st, so technically it’s an advance copy, though it’s the final thing, just released a little early, not an ARC. I’ll be reading that as soon as I can, though I will definitely not be finishing it until copies are legally released. This is a picture of me with Chima, and my stack of her books in front. 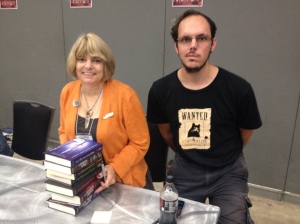 Okay, enough about the other authors. Seeing them was fun, and it would have made for a good day anyway. But that wasn’t the real reason I went. Today, I met Brandon Sanderson. I saw his panel. He was on a panel with 5 other authors, but spent the majority of the time talking, and I don’t think anyone minded at all. I didn’t learn much new about him, other than that the thing he wants most in the future is a hover-board, and he’s annoyed that engineers haven’t designed one yet.

After the panel, while the authors went back to the green room, Sanderson went out into the hallway and signed books and chatted with fans. He said that he would just spend the hour doing nothing, and then sign the books later, or he could sign them now, and be done earlier at the official signing, so he chose to sign them now. His assistants asked him several times if he wanted to leave, and he declined each time, saying that he was perfectly fine, and quite enjoying himself, which he really looked like he was.

I brought with me the 3 Wheel of Time books he finished, 2 anthologies he is part of, and 13 of his novels, and 1 novella. I waited until the crowd has dispersed, because I had so many books, which basically means I allowed everyone else to cut in front of me. I then got my picture taken with him, and he signed all (19) of the books, personalizing every one except the anthologies. While he was signing, he chatted with me for a good 10-15 minutes, answering my questions and just, in general, being an incredibly nice guy. Below are a few pictures. The first is of my stack of books, now that I’m back. On the left are Sanderson’s books, as is the top book on the right-hand stack. The three GRRM books and the two above those did not get taken to the festival today, and are the only ones not signed. The bottom six books are Chima’s, which I got signed, and above that are all of my new books. (Chima’s latest book is right under Steelheart.) 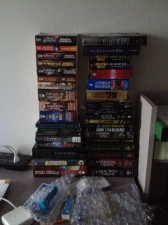 Here is Sanderson on his panel. My first proof that he is indeed a real person, and not just a fictional front for 5 other authors, who occasionally make videos to fool fans. 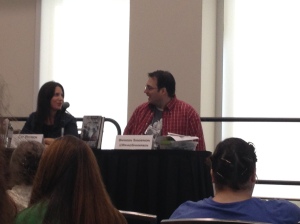 And here is me, with A MEMORY OF LIGHT!!!, signed by Sanderson. 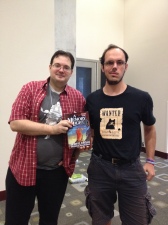 Oh, and Sanderson gave me a Steel-hunt code for having the most books of anyone that day, and said he would send me something else, which I’ll talk about once I get it. Not only did I get all of my books signed, as I expected, I also got to talk to my hero and get some special extras. I went expecting just the signatures, and that that would be awesome. I ended up with so much more! I went with high expectations. They were exceeded in every way!

I can now cross, if not number one, one of the top ten things off of my bucket list. Today was, quite likely, the best day of my life.

Now I’m going to go read Steelheart. I might get some sleep tonight, but who knows?

4 thoughts on “Great Expectations (NOT the book)”