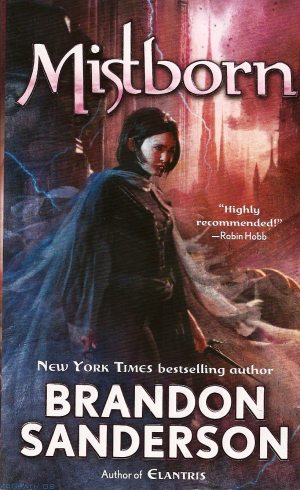 In a world where ash falls from the sky, and mist dominates the night, an evil cloaks the land and stifles all life. The future of the empire rests on the shoulders of a troublemaker and his young apprentice. Together, can they fill the world with color once more?

In Brandon Sanderson’s intriguing tale of love, loss, despair and hope, a new kind of magic enters the stage – Allomancy, a magic of the metals.

Note: The complete title of the book is Mistborn: The Final Empire, but TFE is something of a subtitle, and the vast majority call it Mistborn, which is the only title printed on some editions of the book. I follow that convention in this review.

Second Note: I included the Brazillian cover above as well because of the utterly amazing artwork by Marc Simonetti. It’s my favorite cover, though I don’t have a copy of it–yet.

Mistborn was the first Sanderson book I picked up, after hearing that he would be finishing The Wheel of Time, which, at that time, was my favorite fantasy series. I was wondering who this kid was, and if he was really any good at all. Needless to say, this means that I went into Mistborn with very high standards, standards that I was fairly sure wouldn’t be met.

I don’t think I’ve read a book that has exceeded my expectations by this much since—every new Sanderson I read continues to blow me away, but I already have the highest expectations of those books, and I have decently high expectations of everything else I read too. Perhaps one or two debut novels—The Emperor’s Blades, for instance—have met this mark, but even that is debatable.

But what makes Mistborn so great? Well, what doesn’t?

Sanderson has brought his signature magic system creation to the table, giving us Allomancy, a skill, generally thought to be genetically passed on, which grants the user the ability to ingest and burn certain metals to temporarily gain magical powers. It’s really interesting, as per Sanderson’s second law of magic, because of its limitations: You can only burn as much metal as you have in you, some metals are incredibly rare, and some metals burn much more quickly than others.

Paired with the Allomancy is the world of Scadrial, another brilliant creation. Covered in giant volcanoes (ashmounts), which belch ash into the atmosphere, staining everything with soot and requiring a huge workforce to keep the cities clean, Scadrial is also subject to nightly mists, which cover the entire planet. These mists are the domain of the Allomancers, which gives them—and the book—the name of Mistborn. It’s an incredibly evocative image of a planet, and one that I loved reading about.

And he’s filled the planet with incredibly interesting people. The skaa, the slave class, have been oppressed for centuries, and forbidden from mating with the non-skaa, for fear that Allomantic powers might leak through. But, of course, this restriction hasn’t really worked out all that well for the Lord Ruler, the, uh, ruler of The Final Empire, and there are some among the skaa with magical powers.

But, of course, the world is nothing, the the story is nothing, without interesting characters. And Sanderson has created a cast of them.

There’s Kelsier, a skaa, and yet, somehow, a full Allomancer, with power over all of the metals. He’s survived an incredibly tragic and harsh past, yet he always manages to smile in the face of danger and despair. He wants revenge upon the Lord Ruler, and he is assembling a crew to help him get it. He and his crew are an utterly awesome band with a really cool dynamic—some of my favorite chapters in the book are the planning chapters, where the whole group is in one room, simply talking.

The main character, Vin, is a street urchin skaa who is trying to survive as part of a thieving crew. But when the crew’s latest hit goes awry, she’s in mortal danger—until Kelsier decides to recruit her. Vin’s growth through the story, as she slowly gains the ability to trust others, and her sheer resilience to whatever life throws at her make her an instant favorite, and she is a truly kick-ass heroine.

Elend Venture is the man I would wish to be if I were living on Scadrial. Born to the nobility, he’s not satisfied with the government, and in an empire where such meetings are declared treasonous by the all-power Lord Ruler, he has a close selection of friends who plot ways to better the government—even if it means going against the Lord Ruler’s orders, or overthrowing parts of his system. He also has an incredible love of books, and an utterly disarming attitude that I absolutely love.

The villains, Lord Venture, the Inquisitors, the Lord-Ruler… They are all utterly terrifying, and Sanderson has done them all brilliantly. In a world where GRRM-like books are becoming more and more common, it’s nice to have some villains I can just straight up hate, and some heroes I can cheer for.

Although, as Kelsier says, “There’s always another secret.”

In summary, Mistborn is the brilliant beginning to one of my favorite trilogies of all time, with an utterly unique Sanderson magic system, a dark, ash-covered world, a spunky, yet flawed heroine, and a cool team of thieves who want to pull of the heist of the millennium, and I can’t recommend it highly enough. Five of Five stars, and if you’ve not read this book yet, I may have to disown you.