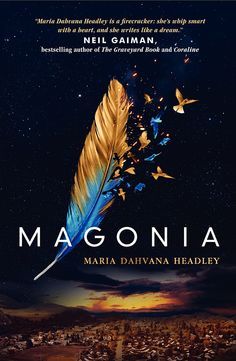 Since she was a baby, Aza has suffered from a mysterious lung disease that makes it ever harder for her to breathe, to speak—to live.

So when Aza catches a glimpse of a ship in the sky, her family chalks it up to a cruel side effect of her medication. But Aza doesn’t think this is a hallucination. She can hear someone on the ship calling her name.

Only her best friend, Jason, listens. Jason, who’s always been there. Jason, for whom she might have more-than-friendly feelings. But before Aza can consider that thrilling idea, something goes terribly wrong. Aza is lost to our world—and found, by another. Magonia.

Above the clouds, in a land of trading ships, Aza is not the weak and dying thing she was. In Magonia, she can breathe for the first time. Better, she has immense power—and as she navigates her new life, she discovers that war is coming. Magonia and Earth are on the cusp of a reckoning. And in Aza’s hands lies the fate of the whole of humanity—including the boy who loves her. Where do her loyalties lie?

I honestly was not sure if I would like this book in the beginning. It begins with stream of consciousness writing, with a slice of life focus. While fascinating and beautifully written in its own right, I could not help but feel that Aza Ray was a special snowflake. Nerdier than the rest of the class? Check. Only one friend who understands her, and is just as nerdy? Check. Nerdiness is almost to the point of being beyond belief? Check. A mysterious illness that not even doctors understand? Needless to say, I had a hard time initially with the novel. However, as I continued reading, these facets added to the fantastic and dream-like atmosphere of the story. While we see a typical YA heroine with special powers and coming to terms with her destiny, the world building and mythos make up for these tropes and others throughout the story.

Maybe I have not read enough, but I have never read something quite like this novel. Ships in the sky? Sure, I’ve seen that plenty of times. Birds that roost in your lungs to amplify your singing voice, however? That as well as plenty of other facets, from the Magonian race to the Rostrae, were unique and refreshing. I fell in love with this world, even if there were plot holes abound and a lack of believable characters.

Even if they were unbelievable, however, I still could not help but empathize with them all. They all had clear goals, clear motivations, and were never black and white. It was also nice to see Aza and Jason’s parents play such a strong role in the story as well. I could not help but root for everyone, cry with them, and laugh with them, especially with how strong the audiobook performance was. Even once I had to turn in the audiobook and read the physical book, their voices stayed with me.

Although there was a romance triangle, it made sense within the context of the novel and did not bother me as much as they normally tend to do. Jason and Aza together, in particular, were adorable, and I could not get enough of them. From the alligator costume in their beginning years to watching giant squid together, the entire time I wanted to both hug them and push them together at every moment.

Factoring in the improbable characters and plot holes (seriously, Jason, using the dark web as an excuse for all the shenanigans you manage to get up to??), I give this novel four out of five stars for wonderful world building, emotional and poetic writing, and for making me cry on the bus home of all places. I will definitely be giving the second book a try, as Aza Ray’s story will stick with me for a long time.  Thank you, Maria Dahvana Headley, for writing such a poignant and amazing novel.