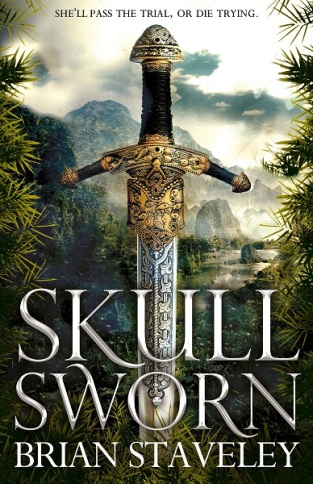 Note: I can’t post a Richard Anderson cover without gushing about it, because THEY ARE ALL SO GREAT. Check out the info in the cover reveal, because it has some cool details and other art. I am also in love with the UK cover here (and have the UK hardcover just for that), and the cover reveal for that one is here.

Pyrre Lakatur doesn’t like the word skullsworn. It fails to capture the faith and grace, the peace and beauty of her devotion to the God of Death. She is not, to her mind, an assassin, not a murderer–she is a priestess. At least, she will be a priestess if she manages to pass her final trial.

The problem isn’t the killing. Pyrre has been killing and training to kill, studying with some of the most deadly men and women in the world, since she was eight. The problem, strangely, is love. To pass her Trial, Pyrre has ten days to kill the ten people enumerated in an ancient song, including “the one you love / who will not come again.”

Pyrre is not sure she’s ever been in love. If she were a member of a different religious order, a less devoted, disciplined order, she might cheat. The Priests of Ananshael, however, don’t look kindly on cheaters. If Pyrre fails to find someone to love, or fails to kill that someone, they will give her to the god.

Pyrre’s not afraid to die, but she hates to quit, hates to fail, and so, with a month before her trial begins, she returns to the city of her birth, the place where she long ago offered an abusive father to the god and abandoned a battered brother—in the hope of finding love…and ending it on the edge of her sword.

I should note that, if this review makes you really want to pick the book up, you can read the first handful of chapters here. The prologue sets up the entire book, so if you want an idea what it’s about, and you don’t like reading summaries, I suggest you go read it now, before reading the rest of this review.

Because Skullsworn takes place chronologically before the Chronicles of the Unhewn Throne trilogy, you can read it before or after. I feel like it’s best read after, because some of the reveals near the end of the book don’t pack the same punch without some of the knowledge you get from the main trilogy. I may be biased in this recommendation, however, as I almost always recommend reading books in publication order. Regardless, if you haven’t read the main trilogy, and are looking for a shorter, less intimidating entry point into the world of the Chronicle of the Unhewn Throne, Skullsworn is a great place to start.

If I were to actually make a complaint about the book, it’s that, in comparison to the previous books that Staveley has written, the tension is a little lower. I think this is because there was only one main character, and we already know what’s going to happen to her. In addition, she doesn’t care that much if she dies, since she’s already a devotee of the death god. Also, there are no empire-shaking plots going on here, merely personal ones, throughout most of the book.

The other complaint I can see being leveled at Skullsworn is that it’s much shorter than the rest of Staveley’s novels. While I would call the original trilogy epic, I don’t think that Skullsworn meets the criteria. It’s a personal quest story, and as such, it’s the right length. I feel like trying to make the book longer by adding unnecessary complications or words would have made it a worse book. I don’t have any complaints about the length other than that I’m once again out of Staveley to read, and I have to go back to waiting for the next one!

Pyrre is a very different viewpoint character than any that Brian has written before. While Kaden can attain some measure of calm, and Valyn is trained to kill, neither of them reach the levels of cold-blooded apathy that Pyrre ascends to in her devotion to Ananshael. This could make for a very boring character – someone who just wanders around and kills people – in the hands of an amateur, but Staveley is anything but an amateur. In his hands, Pyrre had wants, desires, and needs. She is on a quest, her own kind of twisted coming of age story, and while the “life or death” part of the quest doesn’t hold the same pull as it might for another character, it still makes for a compelling narrative, and gives the book a definite sense of progress. In addition, Pyrre learns a lot about herself during the book, and the lessons and her character growth are brilliantly done.

It’s not Pyrre who really sold the book for me, though. It was the ending. While I was enjoying the book throughout, as a very good book that was a quick read and thoroughly enjoyable, I’ll admit, before the ending, I was thinking I was going to give the book four stars.

And then the ending happened.

I can’t really say much other than that it was epic and way better than I had anticipated or thought possible. YOU NEED TO READ IT.

In summary, while Skullsworn follows a single character, and one who is a challenge to make interesting, it pulls this off very well. It’s the right length for the story that it is trying to tell, and the ending packs a massive punch. While I felt that the ending was even better because I read the original trilogy first, Skullsworn can be read at any time, and I think you’ll love it regardless. I give it five of five stars, and very high recommendations. Now go read it so I have someone to discuss it with!

Staveley started his trilogy strong with The Emperor’s Blades (Go read it if you haven’t done so already), and The Providence of Fire was an excellent continuation. The Last Mortal Bond continues that tradition and delivers exactly what I expected, even if it didn’t do so in all the ways that I expected.

WARNING: THERE ARE SPOILERS FOR THE FIRST 2 BOOKS AFTER THIS POINT. DO NOT READ UNLESS YOU HAVE FINISHED BOTH OF THEM.

The first two books set up a lot of conflicts and problems for our characters–Ran il Tornja, the Urghul, the Ishien, etc.–and it takes a lot to resolve them all. The Last Mortal Bond is a brick of a book, coming in at 649 pages in my hardcover copy, and it makes good use of all of them. A number of conflicts are still left open at the end of the book, but given that Staveley is already writing more books in the same world, and that he wraps up all of the most pressing threads in satisfactory manners, it works excellent as an ending.

Staveley has really managed to take the tension up a notch here, with everything from the massive, army-clashing, city-destroying battles, down to the personal fight between 2 or 3 people, and even within some of the characters, and it doesn’t leave much room for breathing, even in such a long book.

A large part of the tension also comes from the fact that Staveley does not shy away from killing characters when necessary, and earlier than you might be expecting–and there were certainly some impactful deaths I was not expecting.

Staveley also manages to throw in a few more twists, and unexpected turns, as well as taking us to some really cool new locations as we begin to explore more of his world. I’m glad that we’re going to get to go back and see even more of it, as even the small glimpses we get of some of the foreign lands are enticing.

Although the trilogy started by focusing on the three children of the Emperor, this book is completely taken over at several points by my favorite Staveley character, the star of the cover art, Gwenna. I will admit that I didn’t like her very much in the first book, when she spent a lot of her time arguing and generally being obstinate, but now that we get viewpoints and some real action from her, she really shines. I can’t say much more about her without spoiling a lot, but trust me. She just gets more and more awesome.

There’s not a lot more to say about this book, honestly. If you liked the first two, you’ll love this one, with numerous twists, nobody being safe, awesome moments all around, though especially from Gwenna, and threads tied up in satisfying ways that nevertheless beg more exploration of the world that Staveley has created. 5 of 5 stars, and since the trilogy is now complete, and all of it is awesome, you really have no excuse for not going out and getting and reading them all right now.