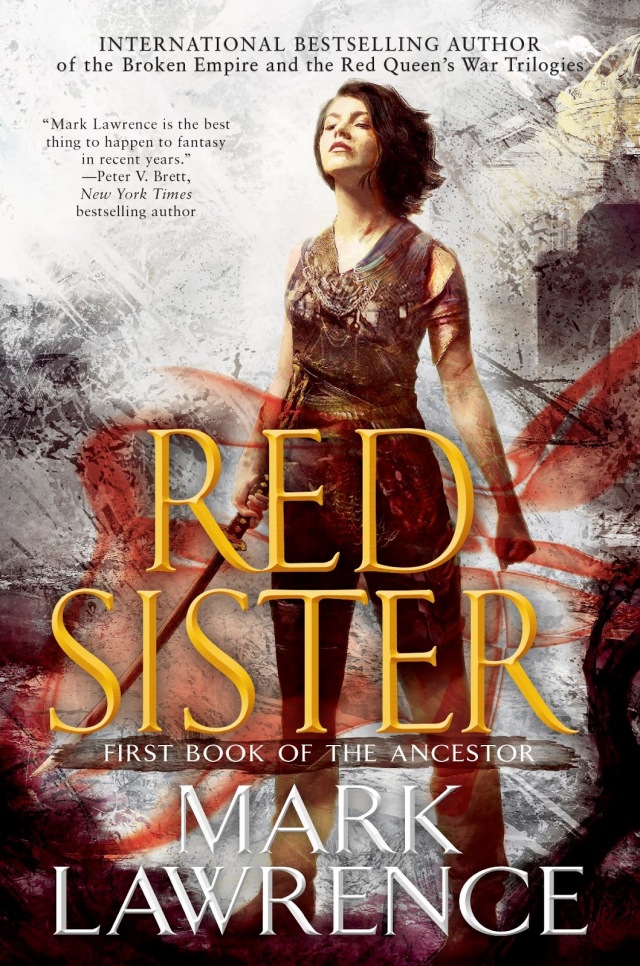 I was born for killing – the gods made me to ruin.

At the Convent of Sweet Mercy young girls are raised to be killers. In a few the old bloods show, gifting talents rarely seen since the tribes beached their ships on Abeth. Sweet Mercy hones its novices’ skills to deadly effect: it takes ten years to educate a Red Sister in the ways of blade and fist.

But even the mistresses of sword and shadow don’t truly understand what they have purchased when Nona Grey is brought to their halls as a bloodstained child of eight, falsely accused of murder: guilty of worse.

Stolen from the shadow of the noose, Nona is sought by powerful enemies, and for good reason. Despite the security and isolation of the convent her secret and violent past will find her out. Beneath a dying sun that shines upon a crumbling empire, Nona Grey must come to terms with her demons and learn to become a deadly assassin if she is to survive…

Disclaimer: I received a copy of this book for review. This has in no way affected my review of the book.

I’ve heard a lot about Mark Lawrence over the years. It’s kinda inevitable when you have the same first name as the guy. I heard some things that made me wary, but I also know a lot of people who are huge fans of his work. I was excited to dive in and find out what all the hype was about, and getting Red Sister to review made me finally make the time to sit down and read one of his books.

My favorite part of the book was the setting. Not the overall worldbuilding, but the plot-based setting, especially in the first 2/3 of the book. It’s set at a monastery, and it’s told from the viewpoint of a young nun in training. The feel is very similar to the school experience from, say, Cinda Williams Chima’s Seven Realms series, or many of Tamora Pierce’s books, notably the Alanna quartet and the Lady Knight quartet. I have fond memories of all of these books, and so getting to go back to this setting triggered some happy nostalgic memories. I definitely enjoyed this part of the book, even if I could tell that I’d seen it all before, and that there were many of the same cliches here that all of the other books use.

I don’t want to brush off the worldbuilding by just talking about the setting, though. What bits we got in this book were very intriguing. We get hints of where the people came from, the disasters that have befallen their world, how they’ve adapted, and what may lie ahead. But it’s all very tangential to the plot, and there were points where I was definitely hungering for more, more, more. I feel like this will play a much larger role in the later books in the series, and what we got here was just a teaser. I also have to note that, until the second half of the book, I sometimes forgot we were on an icy planet, and it felt like the author did too, until it became plot relevant. I would have liked more continuity on this, but the bits about the history we did have, how the moon works, and everything… I can tell Lawrence has a very scientific mind, and I thoroughly enjoyed finding out the details, bit by bit.

Lawrence has a reputation for being a grimdark author, and I don’t know if this book just isn’t representative of his other works, or if that’s just a falsely applied term. This book didn’t feel grimdark at all. There definitely were tight spots and important character deaths, but that’s something I get out of most fantasy novels these days, and nothing felt really overdone. If anything, it felt almost like a YA novel without some of the annoying YA tropes that I hate to read. The main character is young, and most of the time, she remembers to act like it. The plot centers around her learning and coming of age, and many of the secondary characters are of the same age.

I had a hard time getting into the book at the beginning, because Lawrence was playing some fancy tricks with the timeline, flashbacks, and information giving. I got really confused, and there were definitely points where I considered quitting before I really got into it. Once I got into it, however, I was enjoying it enough not to stop,

When I was reading through the book, I found myself putting it down between every chapter at one point, just to take a break, check my texts and emails, etc. While I enjoyed the setting, the plot didn’t draw me along, and the prose sometimes felt disjointed and unpolished. I wish I had been more engaged, but sometimes, there just wasn’t enough tension and intrigue to really draw me in.

I think some of the disconnect may also have been the absence of a completely coherent endgame for the book. I wasn’t sure where we were really going, and what the big climax was going to be until almost when it happened, and so there wasn’t a huge sense of overarching tension to draw me through the book. I could tell nearly from the beginning that none of the large issues raised by the worldbuilding and history wouldn’t be answered in this book. I wish there had been a bit more of a sense of direction, overall, though.

In summary, I quite enjoyed some parts of my first foray into Lawrence’s work. In particular, I liked the worldbuilding aspects, both large and small, and the setting was one I definitely enjoyed. However, I had issues with parts of the plot being boring, and the timelines a bit confusing, with unnecessary jumps, and that threw me off a bit. I don’t know if I’m going to read more Lawrence books, because I don’t think any of them will have the same setting-based appeal that this one did. If you want more girl-at-school learning to fight, politick, and put up with bullies, I recommend reading Tamora Pierce or Cinda Williams Chima, as I enjoyed both of their books more than this one. I give Red Sister three of five stars.